The Dedalus Book of English Decadence 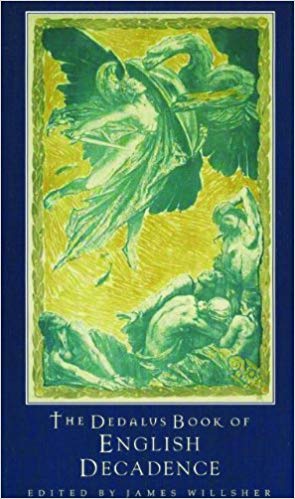 The Dedalus Book of English Decadence was edited by James Willsher and published in 2004.

The subtitle to this volume is Vile Emperors and Elegant Degenerates which I find amusing because it is so hit and miss with this collections of texts.

This is part of an ongoing series (Decadence from Dedalus) several of which are collections of writings like this book and also publishing individual authors as well.

When I first got this book I was all excited considering how much I am getting into the French authors and wanted to see what the English had to offer.  After all other than France;  England and to a lesser degree Russia were the only two countries to really have a Decadent movement of any worth.

The introduction was decent though it really left me wanting I would say.  For some reason it just didn’t really inspire me all that much.  Which is sad.  When you have a collection of works you are really needing that extra push to get you into the book, or at least I do.

After getting into the real meat of the book I quickly began to notice that the quality was rather up and down.  Also I feel that the stories were for the most part superior to the poetry.  Not that that is all bad considering I love prose as much as poetry.  Overall there were a number of notable selections within these pages that I am going to pursue in their full length.

Some of the highlights are Darkness by Lord Byron a sad poem which I could see happening for real.  It makes me also think of the condition of man in general.

Selections from The story of Prince Alasi and the Princess Firouzkah by William Beckford.  These I think were far superior than Vathek by the same author.

Verses from The Giaour by Lord Byron were excellent.

The extract from Confessions of an English opium-eater by Thomas De Quincey were utterly fascinating and warrant a reading of the complete copy.

Tithonus by Alfred, Lord Tennyson was also a lovely piece of poetic prose.

The selection of Anactoria by Algernon Charles Swinburne was an interesting read.

There was a couple of selections in the middle that were just either horrid or I couldn’t bear to continue with them and they were, If you’re anxious for to shine in the high aesthetic line from Patience by Sir W. S. Gilbert and Dolores (Notre Dame des sept douleurs) by Algernon Charles Swinburne.

The passages from Confessions of a young man by George Moore were quite scathing and I will be sure to seeking out this book.

I was happy to find later in the book Algernon Charles Swinburne was allowed to make amends for that horrid inclusion earlier with passages from Lesbia Brandon.  Such an interesting selection, so British, so dramatic!  The imagery was lovely but at times seemed forced though it wasn’t ruining my thoughts about it.  My god I would particularly love to see that field of blooming aconite, ha!

Denys L’Auxerrois by Walter Pater was a very dark and twisted tale that fully deserves to be read in full.  I think it was truly one of the best pieces in the book.  So very Bacchian!

The extract from The picture of Dorian Gray by Oscar Wilde was another super selection.  There is a paragraph that just really hit me,

There are moments, psychologists tell us, when the passion for sin, or for what the world calls sin, so dominates a nature, that every fibre of the body, as every cell of the brain, seems to be instinct with fearful impulses.  Men and women at such moments lose the freedom of their will.  They move to their terrible end as automatons move.  Choice is taken from them, and conscience is either killed, or, if it lives at all, lives but to give rebellion its fascination, and disobedience its charm.  For all sins, as theologians weary not of reminding us, are sins of disobedience.  When that high spirit, that morning-star of evil, fell from heaven, it was as a rebel that he fell.

Pretty powerful stuff!  I can completely agree with what he has written above, I know the power of that passion myself in my life at times.  Up until this book I have never read Oscar Wilde and I will definitely rectify that issue in the near future.

Arthur Symons The Absinthe-Drinker and The Opium Smoker were interesting poems and Lionel Johnson’s excerpt from The Cultured Faun made me want to explore it further as well.

The Decadent to His Soul by Richard Le Gallienne was a intriguing poem and this excerpt below really caught me,

Sin is no sin when virtue is forgot
It is so good in sin to keep in sight
The white hills whence we fell, to measure by-
To say I was so high, so white, so pure,
And am so low, so blood-stained and so base;
I revel here amid the sweet sweet mire
And yonder are the hills of morning flowers:
So high, so low;  so lost and with me yet;
To stretch the octave ‘twixt the dream and deed,
Ah, that’s the thrill!

So much truth to this.

They also had a selection from Arthur Machen’s The Great God Pan which I have read in the past.  This isn’t decadent I don’t think, more horror, and similar in vein to H.P. Lovecraft than anything else.  I do like it though.

Overall these were the best of the best in my opinion.  Sadly the English Decadent Movement was of an incredible short nature and was never to give itself fully to it in such a way to make it last.  The English more or less played at decadence, between the morality, legal proceedings, and Victorian upbringing it was inevitable that it would collapse before it really got started.

I would recommend this book overall because it does give you a decent overview of the English movement. Yes the quality of the selections were up and down but so was everything that was written by the English it seems. At the very least it gives one a decent springboard in which to follow up on the authors that tickle your fancy the most. So enjoy the poems and stories. If you have read it before let me know what you thought of it and check out the book at the link below.